A new philosophy for seismic DATABASES

The first objective of FEMALE is to establish a new suite of parameters that characterizes continuous seismic signals (seismograms), avoiding the identification and labelling of isolated events. A key point in seismo-volcanic analysis is how to represent observations, i.e.: the determination of a set of meaningful features that relate to measurements made on observations. Such representations are typically obtained by extracting characteristics (features) from the data and using them in a new frame of reference to perform a specific task (Figure 4). In past works4,8,11, various methods have been used to transition from the original frame of reference to a feature frame, which can include learning features or designed features. However, using one or more methods for defining features offers no guarantee that the optimum frame of reference for the data will be found. Determining an appropriate feature frame is always the critical point to our study. FEMALE proposes to start the study of this parameter characterization of the signal using a set of initial parameters or values we already tested carefully13. These features will be calculated using temporal segments of the seismogram. We will group them into three types according to the information they represent, and combine the best set of features characterizing the volcano seismic waveforms into a “Vector of Features”. This will have a dimension defined by the number of features: a vector of dimension D. The three types of features are described below. 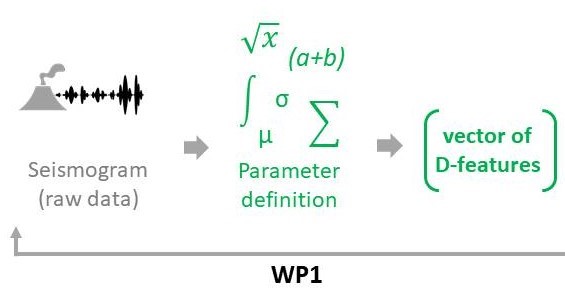 These approaches are examples to be explored in this project. Additional methods will be considered as needed, such as: spectrum-temporal features applied to the seismo-volcanic signals21 or features defined by other researchers12. Additionally, purely data-driven techniques to explore shared feature spaces can be applied using deep neural networks in combination with the proposed features.

Once we have selected the adequate parameters, they will be used for both, the determination of the New Parametric data bases (WP2) and to use them for training automatic classification systems (WP5).

This WP should be finished at the end of the 6 month of the project, but according to the success of the following WPs, the definition of parameters can be revised periodically, being expected to have a revision procedure at the beginning of the 2nd and 3th years.

The working team will be leader by Prof. Benítez with a direct collaboration with Drs. Mota, Alguacil, Prudencio and Ibáñez of the Research Team and several members of the Working Team.